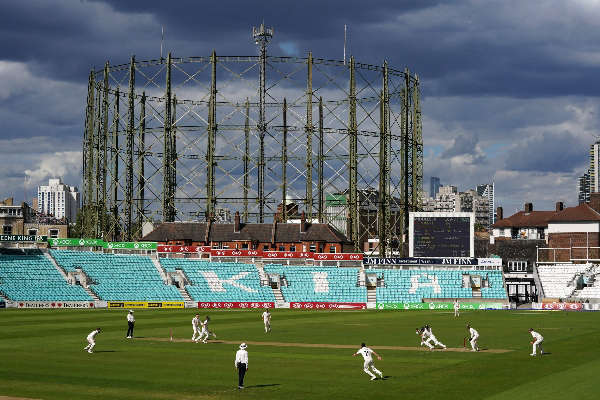 Will Jacks and Jason Roy both hit half-centuries as South Group leaders Surrey thrashed Sussex Sharks by seven wickets at the Kia Oval.

A crowd of 15,000 saw Jacks add a 37-ball 57 to an earlier wicket and astonishing boundary catch as Surrey easily chased down Sussex’s 146 for seven, in which Fynn Hudson-Prentice top-scored for the visitors with a 49 not out from 44 balls that anchored the innings but provided no real forward thrust.

There were still 3.3 overs remaining when Surrey reached 147 for three in reply, completing their total outclassing of a Sharks side who have now lost four of their opening seven Blast fixtures.

Surrey’s mastery was summed up by Chris Jordan, their captain, bowling a double-wicket maiden in Sussex’s 18th over, and with five wins only a no result wash-out against Glamorgan at Cardiff denies them a 100 per cent record.

Jacks and Roy reeled off a stream of magnificent and powerful strokes in an opening partnership of 110 in just 12.3 overs as the Sharks attack was taken apart in ruthless fashion.

Both hit sixes as Delray Rawlins’ left-arm spin was plundered for 19 in the first over of Surrey’s reply, and Jacks then extra cover drove and swung Tymal Mills for four and six in a third over costing 18.

Steven Finn’s second over went for 15 and Roy then merely punched Obed McCoy’s left-arm pace straight for a purely-timed four and Jacks thrashed Mills high over extra cover as the six-over powerplay ended with Surrey 72 without loss.

Roy eventually sliced McCoy to cover to go for 50 from 41 balls, with two sixes and four fours, and three wickets in six balls momentarily slowed Surrey’s progress as Sam Curran (1) played McCoy onto his stumps and Jacks skied to deep extra cover after hitting two sixes and six fours.

Kieron Pollard, though, sauntered in to launch both Archie Lenham and Mills for sixes in an unbeaten cameo of 23 and Laurie Evans also thrashed a cover four off the suffering Mills in his 10 not out.

Sunil Narine, meanwhile, again Surrey’s outstanding bowler, conceded no fours off the bat in his 4-0-21-1 and – remarkably – the former West Indies mystery spinner has been struck for just three in the 20 overs he has so far sent down in this season’s competition.

It was Jordan who ended Harrison Ward’s 23-ball 31 after the young left-hander had at least offered some lusty blows, including a six over long off against Dan Worrall, in a fifth-wicket stand of 51 in seven overs with Hudson-Prentice.

But the Sussex innings always struggled to get going, despite Tom Alsop clubbing Reece Topley for successive legside sixes in the fourth over, which ended with Topley bowling Tim Seifert for four through an ugly slog.

That left the Sharks on 35 for two and they had lost their first wicket when Jacks pulled off a sensational, leaping one-handed catch on the deep square leg ropes to dismiss Ravi Bopara for six off Worrall.

Rawlins, trying to force off the back foot, then succeeded only in edging a simple catch to Topley at short third man off Jacks’ third ball, in the fifth over.

Topley dived full length to his right, in the same position, to cling on brilliantly to a reverse slap from Alsop six overs later as the left-hander, who scored 38 off 28 balls, tried in vain to break the shackles imposed by Narine.

Jordan’s double-strike in the 18th over removed both Ward, carving to deep point, and Oli Carter, leg-before for a duck, and McCoy was run out for two in the final over when Hudson-Prentice attempted to pinch a bye when the tailender heaved and missed at Jordan.

Mills did manage to thump Jordan past mid off for four in that last over and the innings ended with four leg byes to fine leg off Hudson-Prentice’s pads – but there had simply not been enough boundaries for the Sharks against a talented and varied Surrey attack.